Ordinary glass has been made for thousands of years and was a product of most ancient cultures. The ancients also began using crystal in its native form of rock crystal for beads, figurines, and dishes. In attempts to imitate nature, man began making glass that was termed crystal by adding metals to change the character of the glass, and lead was found to be the most successful of these additives. Lead crystal produces a product with a ringing sound (without the tin quality of ordinary glass), it is strong and durable, and it has a curious warmth to the touch. Best of all, lead crystal has a brilliant, silvery appearance that is enhanced by cutting.

The great glass-and crystal-making countries of Europe include the Netherlands, Czechoslovakia, England—and the City of Venice. The history of the art form in England began with the Roman occupation of Britain, and it had a number of high points including the manufacture of stained glass during the ages of cathedral building. As an industry, it reached a new level in the mid 1500s when several leading glassblowers from Venice moved to London and found the favor of Queen Elizabeth I who promoted the art form. The Venetian influx and the Queen’s support made discovery of lead glass possible in the next century.

George Ravenscroft established his own glasshouse in London in 1673 and, shortly after, patented a process for making “flint glass” or lead crystal. Ravenscroft found that the addition of lead to glass during the melting process improved the quality of the glass. Early defects included the introduction of a bluish tinge and “crizzling” of the glass. Increasing the lead content in the crystal eliminated such flaws. He continued experimenting with the chemical composition of glass, and eventually eliminated the imperfections. The practice of cutting glass came into prevalence during Ravenscroft’s time (previously, unadorned glass was thought to be beautiful on its own), and his invention was the perfect medium for this kindred art form. In the 1700s, the number of glasshouses in England grew tremendously, however a government tax on glass began to hurt the business.

Manufacturers escaped the Excise Tax by moving their factories to Ireland, and it was during this period that Ireland became the new center for production of lead crystal, notably in the port city of Waterford. There, George and William Penrose founded the Waterford Glass House in 1783, and, by 1851, the house won worldwide attention at the aptly named Crystal Palace Exhibition (one of the first world’s fairs) in London. The profitability of the Irish glass houses also caught the attention of the tax authorities, and the tax on glass that was not instituted in Ireland until 1825 finally forced the closure of the Waterford factory during the year of its great Crystal Palace triumph, 1851.

Glass houses elsewhere in Europe thrived throughout the 1800s when Baccarat in France, Orrefors in Sweden, and Swarovski in Austria, to name only three, became leading lead crystal manufacturers. The Irish tradition did not resurface until after World War II when a resurgence of interest in the Irish arts encouraged a group of businessmen to resurrect Waterford. Today, all of the name glass houses have flocks of admirers and collectors worldwide, and they often market each others’ products as a means of boosting international interest and protecting that small brotherhood of artists in glass. 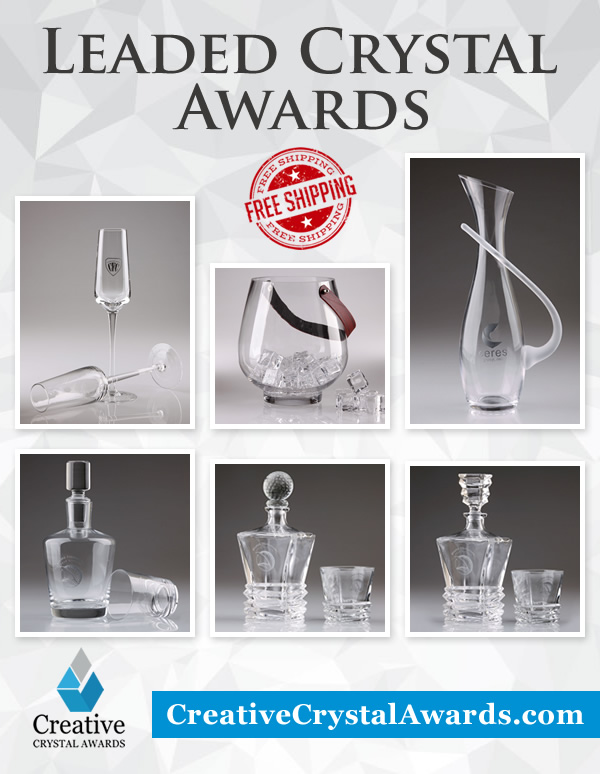 The raw materials for glass making are a chemical “cocktail” of silica-sand (also called silver sand), potash, and red-lead. A yellow oxide of lead called lethargy was used when lead crystal was first developed, and it is produced from red-lead oxide when some of the oxygen is driven off. Silica occurs in nature as the sand found on beaches (although sand from inland sandstone deposits is used in glass making) and the pure form of quartz that produces hexagonal crystals. Each glass works factory concocts its own formula that produces the qualities needed for its particular manufacture of glass. A typical comparison of the quantities of materials that make the differences between ordinary, or table, glass and crystal follows: ordinary glass with 63% silica-sand, 22% soda, and 15% limestone; and lead crystal with 48% silica-sand, 24% potash, and 28% red-lead.

Colored glass is made by adding other metals to the glass mixture. Manufacturers may also add tiny amounts of saltpeter (a nitrate of potash), borax, and arsenic to their glass recipe. Standards have been devised for the quality of crystal in which the percent of lead or other oxides, the density of the glass, the refractive index of the glass, and its surface hardness are established. Crystal glass, pressed lead crystal, lead crystal, and full lead crystal are defined differently based on these standards.

Although they may be similar among crystal makers, each firm typically has its own designs, just as it has its own mixture of raw materials (an element that makes particular designs possible). Approaches to design vary depending on the purpose of the product. If the crystal-maker is designing a line of glasses and decanters, customers will want to add or replace pieces over the years. Designs must then be chosen to be enduring over the years, and contemporary pieces, particularly, must be carefully made to age as well as having trendy appeal. Collectibles are made to reflect the best characteristics of the crystal house, but they can truly change with fashion and taste more often than pieces in a matched set. Emphasis in design for most houses is on preserving the high standards associated with that name.

Actual design is accomplished by skilled artisans who are knowledgeable in the techniques of glass making, the thicknesses required for particular objects, the depth of cuts that can be made in those thicknesses, and the skills of the glass cutters and engravers who will do that work. The patterns or designs are classified according to flat, hollow (rounded), or miter (v-shaped) cuts, and the motifs developed from these basic cuts are an encyclopedia of combinations with names like hollowed or strawberry diamond, flute, fans and splits, alternate panels, and hobnail. Sizes and types of pieces that will be part of that design line are important, and even the names are selected to evoke heritage or modernity as appropriate.

A team of glass blowers uses physical strength, breath control, and dexterity to create the chamber with a certain thickness. This skill is only developed by experience. The thickness must be suitable to the object itself but also to the depth of the facets that will be cut in the gloss.

Glass making is a 2,000-year-old process that has changed remarkably little in that time. Raw materials are essentially the same, although experiments over the years with the addition of lead to crystal have improved the product.

Quality is a continuous process at the lead-crystal factory. The crystal artists themselves provide the first level of quality control through their experience and unique skills. No two pieces are identical despite adherence to designs, heritage, and standardization of patterns and cuts. Stringent inspections are performed at each step of the process. This helps avoid wastage in that in imperfectly cooled piece is never sent to the cutter; inspections also ensure conformity with the acceptable range of variations that are inevitable in handwork and among individual cutters and other artists.

There are no byproducts from production of lead crystal. Waste is avoided in raw materials and by careful control of processes like annealing. Glass factories have the advantage that their products can be melted again in the furnace, so many boast that they produce no seconds because of this luxury of being able to fully recycle an imperfect product.

Lead crystal has a promising future because it has an enduring association with both handcrafting and elegance. An “ordinary” family or collector without an extraordinary bank account will find it satisfying to build a crystal service awards or collection of crystal figurines over a lifetime, and this sense of style and worth is inherited by future generations, as the pieces themselves will be. The artistry in each piece of lead crystal is also appreciated in an age of sound bites. Even the most contemporary design represents a long heritage and the skills of the artists who created it. This sense of appreciation shows every sign of flourishing in the next century, as it has in the past.